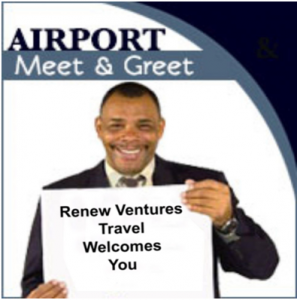 On arrival via South African airline, our representative will meet you at the tube of the aircraft using a name sign. You will be assisted through immigration and customs formalities. Led into the waiting air-conditioned vehicle, and driving straight to your booked hotel. Check-in. Rest of the day in hotel.

You will be picked up from your hotel at 09:00GMT to begin your full day city tour of Lagos. Start off with a visit to the famous Tafawa Balewa Square, venue of Nigeria Independence in 1960. Proceed on to the Freedom Park, formally a prison facility. A trek through this oasis nestled in Lagos will give you a 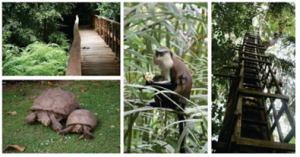 cultural narrative and historical context that will clue you into the richness and diversity of Nigerian Culture. It is an artistic nirvana from modern to traditional outdoor sculptures. Take a stroll or grab a bite and take in the sites. It’s also a well known music venue and if you are there at the right time you can catch a show.

Proceed to Nike Art Centre, one of Nigeria’s hidden treasures. Located in Lekki, comprises of an art gallery and textile museum featuring over 7,000 pieces.

Proceed to Lekki Art Market where you can bargain and purchase different local arts, fabrics, jewelry and more. Proceed to Shoprite for light refreshment. Return to hotel, rest and overnight in hotel.

Set out after morning breakfast to immerse yourself in the beauties of nature on this amazing tour. Located in the coastal environs covering an approximate land area of 78 hectares, extending from

kilometer 19 along the Lagos-Epe Expressway and ends up a very close distance to the Atlantic Ocean near Okun Ibeju Village, Eti-Osa Local Government Area in the Eastern district of Lagos

Enjoy the ride to the Lekki Conservation Centre. On arrival, you will begin with a scenic walk through the nature reserve. Spot monkeys and birds in the towering trees as you make your way through the woods on a rustic wooden walkway to the 401 meter Canopy Walkway.

Walk on the wild side as you climb across six suspended canopy bridges on the longest canopy walkway in Africa. Gosh as the park ranger displays acrobatics on the bridge and soak up the amazing panoramic views from above the tree tops at 22.5 feet above ground level. Wind down after the adventure with a tour of the rest of the conservation centre. Visit the fish ponds and play human size chess if you please.

Your tour ends with light refreshments at a picnic in the grassland area of the park after which you will be given a complimentary ride back to your hotel. Rest and over night in hotel 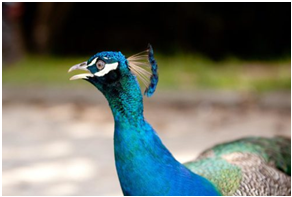 After morning breakfast, we will conclude a two day visit of the conservation to enable us attempt to see more elusive lekki predators.

Enjoy the ride back to the hotel. Rest and over night in hotel

After morning breakfast, start your short beach escape with a leisurely 2 hour drive via private vehicle upon pickup at your hotel at 09:00GMT. View the sprawling city of Lagos as you drive by.  Arrive at the 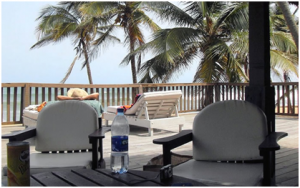 beautiful La Campagne Tropicana Resort where you will gain access to all the resort facilities such as the pools, horseback ride, kayak, basketball court etc.
Relax under the palm trees and watch waves crash onto the sandy beach shore. Take a dip in the pool and kayak in the lake. Have lunch on the beach (meal not included), sip some fresh coconut juice and forget your worries. Make the beach escape your own on this private resort day-visit that is guaranteed to have you feeling rejuvenated.

*Swimming in the ocean is not advised. Return back to the hotel. Rest of the day in hotel

Leave your Lagos hotel in the morning at 10:00am, by air-conditioned minivan, and travel west out of the city towards Benin City region. After a journey of roughly four hours, arrive at your hotel in Edo state. Check-in. and familiarize yourself with your immediate surroundings.

Rest and overnight in Edo hotel.

Rise up early for a panoramic view of the Ancient kingdom of Benin City, the capital of Edo state. Our first stop and very important is The Royal Oba’s Palace a cultural and historic ‘goldmine’ with 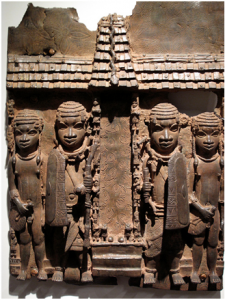 Proceed to Igun-Eronmwon Quarters. It’s also called Igun Street, a Cultural Heritage site by UNESCO. Home to brass/bronze casting industries in Benin City and gives an opportunity to witness bronze casting in its various stages and buy any piece of your choice. It’s the home guild of Benin Bronze casters with various popular bronze works of kings, queens, other notable royalties and other artistic motif to explore.

Proceed to The Benin City National Museum opened to the public on August 10, 1973. The Museum contains priceless objects of antiquities from Benin Kingdom and other parts of the country. The first known Benin Museum started in the Oba’s Palace. With 3 galleries the museum is one of the largest museums in terms of indigenous artifacts in Nigeria. 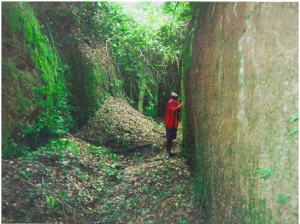 The Benin moat, also known traditionally as Iya, is the largest man-made earthworks in the world. One of the wonders of the world, it predates the use of modern earth-moving equipment or technology in these parts. The moat encircles  the old perimeter precincts of the City and was constructed as a defensive barrier in times of war

We will have some light refreshment In an ancient city which finds pride in its history, Kada Plaza is a breath of fresh air. The Plaza is one of the best places to hang out, relax or just have a fun time. With a cinema, Chinese restaurant, shopping complex and go kart racing available, Kada Plaza has something for everyone.

Transfer back to hotel after rest. Overnight, in Edo hotel. 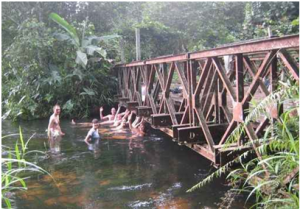 After an early morning breakfast, check-out from you Edo Hotel for a 2 days safari at the Okomu forest. As you arrive Okomu National park, at the Eco-Tourist lodge, check in and refuel on the lavish lunch buffet of a variety of sandwiches and roasted chicken and quenched you thirst with beverage of choice that is ready and waiting for you. Relax on the deck of your Eco tourist lodge encircled by the forest. 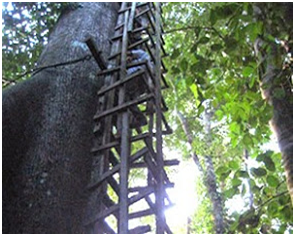 After your morning breakfast, we will embark on a guided tour of Okomu forest, Our first destination is to the taller of the two tree houses which shot 140 feet up into the air above the tree line allowing for a gorgeous view of the forest. Climb up the tree for a spectacular view of the sunset. After the sun set, return to the lodge, for a quick shower followed by a scrumptious dinner. The rest of the evening will be spent relaxing on the deck.

Rise early and enjoy a hot drink at the lodge before meeting your guide for a sunrise game view. The early hours of the morning are best for spotting the more elusive of Okomu’s wild animals. Watch the 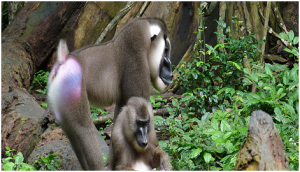 bush come alive as the parks predators finish their nighttime hunting and antelopes, head to the river to drink. Have your camera ready to capture photos of Okomu’s rare birdlife as you climb up another tree house, this one rising 110 feet into the air, to catch a glimpse of the forest from above. We then continued hiking through the forest to the Iron Bridge, a remnant of access to the surrounding plantations at the western edge of the National Park, Once arriving at the bridge, you can jump into the refreshing swift moving waters to cool off from the hike. The beautiful scenery with unique white flowers piercing the surface of the water will make the swim a wonderful way to culminate the trek through the forest. Upon arrival back at the lodge, freshen up and share the days experience over drinks and a BBQ dinner. The rest of the evening will be spent relaxing on the deck.

After breakfast and check-out from Okomu tourist resort. We will head out on journey of approximately 6h00mins drive to IBADAN, – the last bastion of the great Oyo empire; the city of the Yoruba gods/civilization and so many “first” in Africa; and the de-facto capital of the Yoruba nation. On arrival in Ibadan, check in to your booked hotel. Rest and overnight in Ibadan hotel 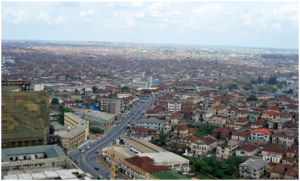 Depart the hotel in the morning and Explore Ibadan, (a city at the edge of the savannah) and the capital city of Oyo State. This tour brings you closer to the third largest metropolitan area, by population, in Nigeria, after Lagos and Kano, with a population of over 3 million. Ibadan is also the largest metropolitan geographical area. At Nigerian independence, Ibadan was the largest and most populous city in the country and the third in Africa after Cairo and Johannesburg. 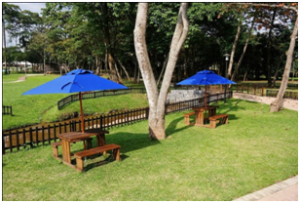 Proceed to Agodi gardens. Get involved in recreational activities if you like and visit, water park, zoo and a forest walkway. After light refreshment, visit one of the local eateries for a taste of the local food called “Amala”(optinal).
Proceed to hotel for rest and overnight in hotel

(Free to explore on your own) 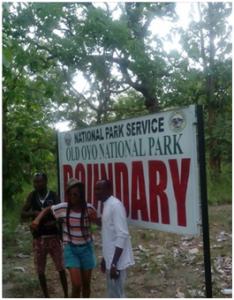 Morning 09:00GMT, after an early morning buffet breakfast at the hotel, we will enter into our air-conditioned waiting car at the hotel to the north-western part of Oyo State to experience Old Oyo national Park. The park takes its name from Oyo-lle (Old Oyo), the ancient political capital of Oyo Empire of the Yoruba people, and contains the ruins of this city which was invaded by the Fulani in 1837. Game drive, view the flora and fauna of the Old Oyo National Park.

Transfer back to hotel and overnight in Ibadan hotel.

Free to explore on your own

Morning 09:00GMT, after an early morning buffet breakfast at the hotel transfer to Old Oyo National Park for Game viewing Transfer back to hotel and overnight in Ibadan hotel.

Morning 09:00GMT, after an early morning buffet breakfast at the hotel transfer to Old Oyo National Park for Game viewing Transfer back to hotel and overnight in Ibadan hotel.

Morning: 09:00GMT, after an early morning buffet breakfast at the hotel transfer to Old Oyo National Park for Game viewing Transfer back to hotel and overnight in Ibadan hotel.

Morning: 09:00GMT, after an early morning buffet breakfast at the hotel transfer to Old Oyo National Park for Game viewing Transfer back to hotel and overnight in Ibadan hotel.

Check-out from Oyo hotel in the morning after breakfast. Proceed by road to Lagos. Arrive Lagos and check into Lagos Hotel

Rest and overnight in Lagos hotel

Today will be dedicated for departure as the south African flight leave Lagos at 22h10. Enjoy your last day on your own. Our driver will be at the hotel at 15h00 to transport you to the international airport for flight to South Africa

There are no reviews yet.

Make your way through the Holy Land

This leisurely Lekki Art & craft tour
$250.00
One tour per person